On August 4, 2020, voters in the Waterford School District will be asked to consider a no tax-rate increase bond proposal. The proposal is about enhancing the learning environment and protecting the community investment in its school district.

The bond proposal calls for:

Please take a moment to take a brief survey regarding the August 4, 2020 WSD bond proposal.

Is it true that there will not be an increase in the current tax rate?

Yes. If voters approve the August 4th bond proposal, the current tax rate will not increase. In fact, the tax rate is expected to remain at or below the current levy.

How can the school district raise $150 million without raising taxes?

Some of the school district’s bonds will be paid off this year. The August 4th bond will replace those bonds. Hence, the current tax rate will be extended, not increased.

Will there have to be cuts in other areas to pay for the bond projects?

What, specifically, will be done with the bond proposal revenue?

Why did the school district vote to place the bond proposal on a special election in August?

This is not a special election. It is the date of Michigan’s August Primary. This means that the school district will not incur costs for placing the bond proposal on the ballot.

Why isn’t the bond money being used to pay teachers more?

By law, bond revenue cannot be used to pay employee salaries or fringe benefits. Bond revenue may only be used for items specified in the ballot proposal and must be audited annually.

Why are we proposing building an early childhood center when we already have one?

The current center needs significant repairs, both inside and out. Aside from that, it is not large enough to hold all preschool classes. Building a new early childhood center will provide a safe facility that brings all preschoolers together. It is an investment in our future, giving our children greater opportunities to prepare for a successful start in kindergarten.

At this time, the school district is setting plans for the 20/21 school year that include options for families. These plans will be solidified once the state sets the back-to-school guidelines. Once finalized, the district will share a detailed back-to-school plan with the entire community. The projects in the bond proposals, such as technology, technology infrastructure, and classroom remodeling—will help assure that the school district is better prepared to meet the educational needs of students next school year in person and through distance learning.

Wasn’t money from previous bond proposals supposed to pay for projects that are included in the August 4th bond proposal?

Do you know what schools will be getting renovations if the bond proposal passes?

Yes. The projects for each school posted on the district website.

Didn’t we just pass a bond for roofs and other upgrades?

Roof replacements and other upgrades were included in previous bond proposals. Items such as this are included in the August 4th bond proposal to take care of school facilities that were not scheduled for such improvements previously.

Why do people without school-age children have to pay school taxes?

For the same reason that all homeowners pay taxes to support other community services such as police and fire. These are the things that make a community desirable. It should also be noted that the Waterford School District provides numerous services to people without school-age children.

How Does the 2020 Bond Impact My School? 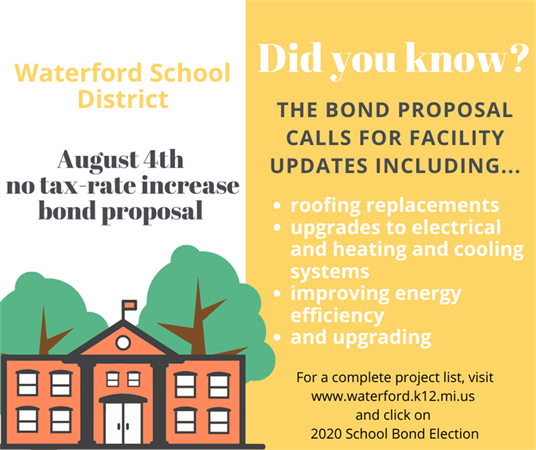 To have specific questions answered, to register concerns, or to obtain more information, call: